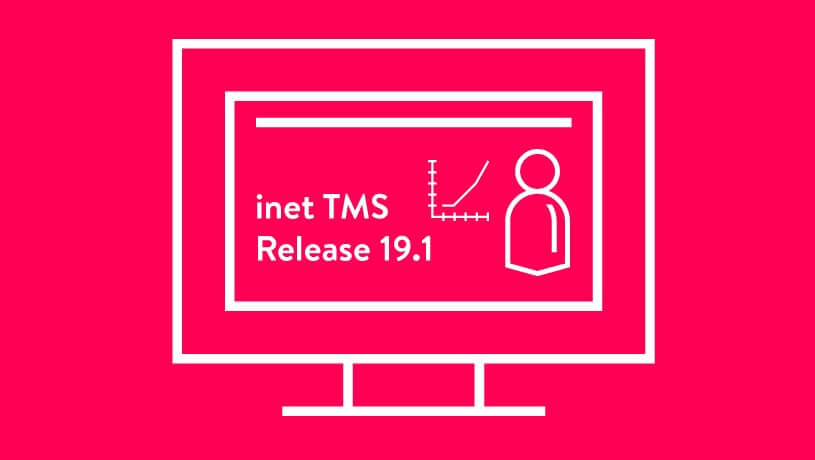 The highlights of the latest inet TMS release

We are excited to present the 19.1 version of the inet TMS, a release fully focused on usability, conversational user interfaces and performance.

Bringing innovation 4 times a year is one of inet’s promises to its customers, and in order to pick the right new features to develop, we constantly look into the market an keep an ear on our users’ needs, as part of our agile processes.

For the 19.1 release we worked on performance improvements for all of our billing-related functionalities that will touch every user working with those modules, obtaining very satisfactory results like:

After this release, most of our solutions have new features and an improved user experience.

When trying to find a specific transport order or any other information, it can be time-consuming to type the same search criteria again and again. That’s why we developed the new filter templates, allowing the users to save common filter criteria as templates and reuse them. But this is not the only news for the Transportation Management solution, there are many other possibilities available:

In our previous release we made the first step with the TM solution into a new user experience, now the Container Management solution follows proudly introducing a new user interface.

Don't be surprised when you login, because with 19.1 all users who log in the inet CM -without a portal or the inet-SE domain- will sea new login screen, adapted to our new branding. For optimal presentation of content in the user interface (old and existing) we recommend to use a screen resolution of 1280x800, i.e. minimal recommended screen resolution, or higher.

The new iTrace provides a better workflow and a whole new UI design with a clearer, simpler and more intuitive interface which gives the user a better experience and enhances usability.

This mobile solution will be also available through Facebook Messenger, true to our strategy to provide mobile applications through conversational apps. The iTrace Messenger user interface has been implemented as a chat bot (iTracebot) providing a very user friendly and intuitive application.

Moreover, iTrace has been redeveloped in React Native to provide native apps on both the Android and IOS platform. iTrace is available under Android Version 4.1 or later or IOS version 9 or later. The apps are available in Google Play and soon in the Apple app store under the name of iTrace. Look out for the Alpega logo!

The road mapping and developing process already started for our next release, planned for May.

If you are already using the inet TMS you can check your Jira dashboard for change requests, support issues and technical details please. And you can always contact your logistics consultant if you have any questions or if you are interested in the features recently released.